Saturday 14th September 2019 is the final day of our Charlton and Woolwich Free Film Festival and we end with two films in the centre of Woolwich. In the afternoon we have an indoor screening of Akeelah and the Bee at 2pm with our grand finale at 8pm in Artillery Square: First Man with a chance to look through some telescopes kindly brought along by the Flamsteed Astronomy Society.

If you’ve come to any of our events so far we hope you’ve enjoyed the films and will keep an eye out for us next year, in our fifth year. Thank you for supporting us! 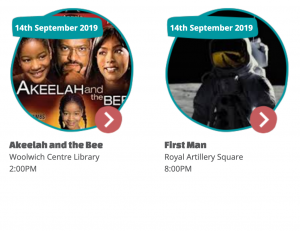 “Essentially a sports movie” about competitive spelling, Akeelah and the Bee looks at the high-pressured and often privileged world of American spelling bees where talented spellers are intensively coached to win. Akeelah Anderson (Keke Palmer), a precocious eleven-year-old African-American girl, has the talent but lacks the resources and the confidence. Her school supports her and finds her a coach, Dr Larabee (Laurence Fishburne), who develops her skill and resilience but her mother Tanya (Angela Bassett) worries that Akeelah is just setting herself up for disappointment.

A biopic on the life of the legendary American Astronaut Neil Armstrong from 1961-1969, on his journey to becoming the first human to walk on the moon. Exploring the sacrifices and costs on the Nation and Neil himself, during one of the most dangerous missions in the history of space travel.

This event will be supported by the Flamsteed Astronomy Society www.flamsteed.info. Although the moon will sadly not be visible during the event, volunteers from Flamsteed will be bringing their telescopes so that members of the public can take a look at some other wonders of the night sky.

The Charlton and Woolwich Free Film Festival is funded by Royal Borough Greenwich and we are grateful to Berkeley Homes for the use of Royal Artillery Square on the opening and closing nights.