On Day 7 (Thu 12 Sep) of our Charlton and Woolwich Free Film Festival we have two screenings: a double-bill at Charlton House and an alien invasion at Starbucks, Charlton. 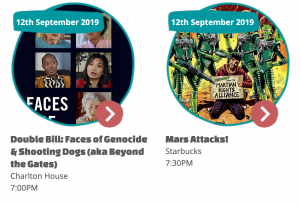 Faces of Genocide (30 min, trailer above): In this award-winning documentary, five survivors of genocide give dignified, powerful accounts of starvation, deprivation, the murder of families, and living in constant fear.

These witnesses and survivors of the slaughter of Yazidis, Armenians, Jews, Cambodians, Bosnians, Rwandans, Darfurians, and Rohingya argue for strong, official international intervention. Followed by a Q&A with producer/co-writer Gayle Donsky.

Shooting Dogs (aka Beyond the Gates) (1hr 55min, trailer above): Based on real events in the spring of 1994, when Rwandan Hutus slaughtered a million of their Tutsi countrymen, this story tells of 6 days in Kigali’s Ecole Technique Officielle, where the expatriate English priest who runs the school and an idealistic young teacher try to shelter Europeans and Tutsis.

UN troops who should protect the victims are paralysed by institutional failure and indifference. When white Europeans are rescued but not black Rwandans, the ethical horror becomes shamingly clear.

Refreshments not available to buy during this event, so please feel free to bring your own food & drink.

Other films showing at Charlton House
Dean Spanley (Fri 13th Sep) – 8.30pm – dog-friendly screening outdoors (or inside if it rains, still dog-friendly though)

Gasp!  A fleet of Martian spacecraft surrounds the world’s major cities and all of humanity waits to see if the extraterrestrial visitors have, as they claim, “come in peace.” U.S. President James Dale (Jack Nicholson) receives assurance from science professor Donald Kessler (Pierce Brosnan) that the Martians’ mission is a friendly one

But when a peaceful exchange ends in the total annihilation of the U.S. Congress, military men call for a full-scale nuclear retaliation.

Thrill! As Earth fights back with an unexpected weapon. Take that, Martians!

Refreshments: American-style coffee, cookies and muffins are available to buy at the downstairs counter. If you mention the film at the counter you can get 10% off hot drinks.