MON 9 SEP: NIGHT OF THE HUNTER (@ChurchCharlton) & ONE CUT OF THE DEAD (@SwanPubSE7) for Day Four of #CWFFF19

MON 9 SEP: NIGHT OF THE HUNTER (@ChurchCharlton) & ONE CUT OF THE DEAD (@SwanPubSE7) for Day Four of #CWFFF19

It’s Murder Monday on Day 4 (9 Sep 2019) of the Charlton and Woolwich Free Film Festival and we have two films for you in Charlton, SE7. We’re delighted to welcome St Thomas’ Church, as a new venue to the festival – we’ll be screening The Night of the Hunter there at 8pm, and One Cut of the Dead will be showing at The White Swan, also 8pm. It’s also Meatless Monday at the Swan as Rocket will be providing their delicious zombie-themed vegan food to accompany the on-screen comedy horrors. 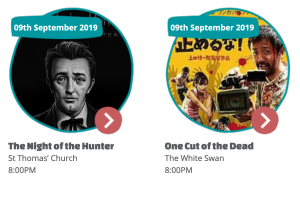 ONE CUT OF THE DEAD (15)
OUTDOORS (bring something warm to wear, we’ll have some seats)
The White Swan, Charlton Village
Film starts at 8pm, doors 6.00pm

The Night of the Hunter is an American gothic, Biblical tale of greed, sin and innocence, and the only film ever directed by the great British actor Charles Laughton. It’s hauntingly strange imagery has influenced directors such as Martin Scorsese, Terrence Malick, the Coen brothers, Spike Lee and David Lynch.

Although one of the greatest American films of all time, this imaginatively chilling work was both ignored and misunderstood at the time of its release.

Come and see this masterpiece of dark cinema in the perfect surroundings of St Thomas’ Church.

ONE CUT OF THE DEAD opens in a run-down, abandoned warehouse where a film crew are making a zombie film…

Yet, this is no ordinary warehouse. It’s been said that it’s the site of where military experiments took place…

Out of nowhere, real zombies arrive and terrorize the crew!
This may sound like a the plot of a clichéd zombie film, but One Cut of the Dead is something completely different! Starting off with a non-stop one-take 37 minute shot, the film then completely switches direction and turns the zombie genre completely upside down into a charming, audience-friendly comedy!

Young director Shinichiro Ueda and his cast of non-professionals have created something fresh and entertaining which has become a massive hit not just in Japan, but across the world!

This event will be sponsored by local vegan pop-up Rocket, with their zombie-themed menu designed especially for this event.  You can find out more about Rocket by following them on Twitter (Rocket: @vegan_pop_up).

We plan to screen this event in the pub garden, so please wear appropriate clothing.  In the event of poor weather, the screening will take place inside.