On Day 3 (Sun 8 September) of our Charlton and Woolwich Free Film Festival we have another two films for Sunday evening, both of which take place outside. Please wrap up warmly – however brightly the sun has shone during the day it’s definitely getting quite cold outside in the evenings. 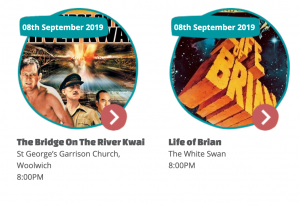 THE BRIDGE ON THE RIVER KWAI (U)
OUTDOORS (bring something warm to wear, there will be seating)
St George’s Garrison Church, Woolwich
Film starts at 8pm, doors 7.00pm

LIFE OF BRIAN (15)
OUTDOORS (bring something warm to wear, there will be seating)
The White Swan pub, Charlton Village
Film starts at 8pm, doors 7.00pm

1. The Bridge on the River Kwai (U) – 8pm, St George’s Garrison Church [OUTDOORS]

The screening is outside but there is canopy covering available if it rains.

Starting life as a joke movie title – ‘Jesus Christ: Lust for Glory’ – Monty Python’s 1979 biblical satire delighted audiences and outraged Mary Whitehouse. Deciding against a focus on JC (Christ, not Cleese), the film features a baby born in the stable next door to Him on the same night, who grows up to be… Brian.

Regarded by many, including Michael Palin, to be the best Python film, Life of Brian gave birth to a lifetime of memorable lines and characters, and still holds up brilliant today, 50 years after release. But remember, he’s not the messiah…

Festival stalwarts, Dirty South and Dulwich Raider from @Deserterblog return to present an evening of hilarity, irreverence and booze, but not necessarily in that order.

We plan to screen this event in the pub garden, so please wear appropriate clothing. In the event of poor weather, the screening will take place inside.