It’s PE / Athletics day for Day 2 (Sat 7 September) of our Charlton and Woolwich Free Film Festival with circus skills in the morning (The Greatest Showman) and rock climbing in the evening (Free Solo). We’re also welcoming two new venues to the CWFFF family: Charlton Manor Primary School, and The Reach. 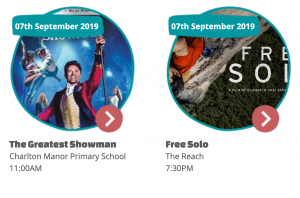 Orphaned, penniless but ambitious and with a mind crammed with imagination and fresh ideas, the American Phineas Taylor Barnum will always be remembered as the man with the gift to effortlessly blur the line between reality and fiction. Thirsty for innovation and hungry for success, the son of a tailor will manage to open a wax museum but will soon shift focus to the unique and peculiar, introducing extraordinary, never-seen-before live acts on the circus stage. Some will call Barnum’s wide collection of oddities, a freak show; however, when the obsessed showman gambles everything on the opera singer Jenny Lind to appeal to a high-brow audience, he will somehow lose sight of the most important aspect of his life: his family. Will Barnum risk it all to be accepted?

The school cafe (sweet pickings) will be open from 10:00 until 14:00 and would welcome film-goers to either a pre-show snack/lunch afterwards!

The school garden will also be open to visitors.

(The screening will take place in the upstairs assembly hall)

Professional rock climber Alex Honnold attempts to conquer the first free solo climb of famed El Capitan’s 900-metre vertical rock face at Yosemite National Park. Starting out at 5:32am on 4 June 2017, he completed the route’s 30 pitches in 3 hours and 56 minutes.

The film itself won multiple awards, including Best Documentary Award at the 2018 Academy Awards. Words to describe Alex Honnold: Brave? Stupid? Spiderman? Come and see and make your own mind up.

Bring your own chair. Cafe Rosielees willl be serving food before the film.