Let the FREE films begin! This year we have 21 films at 18 screenings over 9 days.

For the opening night (Friday 6 September) of our Charlton and Woolwich Free Film Festival, now in it’s fourth year, we have TWO fabulous film. Click on the Facebook links to let us know you’re coming, and please tell your friends. 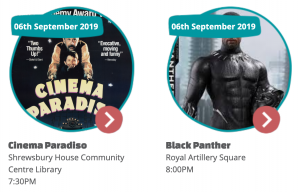 This multi award-winning homage to the love of cinema tells the story of Salvatore, now a successful film director, returning home for the funeral of Alfredo, his old friend who was the projectionist at the local cinema throughout his childhood. Soon memories of his first love affair with the beautiful Elena and all the highs and lows that shaped his life come flooding back, as Salvatore reconnects with the community he left 30 years earlier

After the death of his father, T’Challa returns home to the African nation of Wakanda to take his rightful place as king. When a powerful enemy suddenly reappears, T’Challa’s mettle as king — and as Black Panther — gets tested when he’s drawn into a conflict that puts the fate of Wakanda and the entire world at risk. Faced with treachery and danger, the young king must rally his allies and release the full power of Black Panther to defeat his foes and secure the safety of his people.

The Charlton and Woolwich Free Film Festival is funded by Royal Borough Greenwich and we are grateful to Berkeley Homes for the use of Royal Artillery Square on the opening and closing nights.