On Day Seven (Thursday 13th September 2018) of the Charlton and Woolwich Free Film Festival we have two events – The Doo Dah Man showing at Starbucks in Charlton (Bugsby’s Way) and at Charlton House we have our 3rd International Short Film competition. Both free, both starting at 7.30pm. 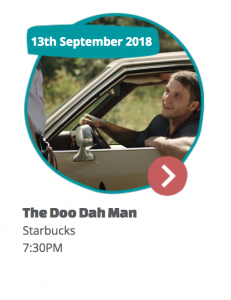 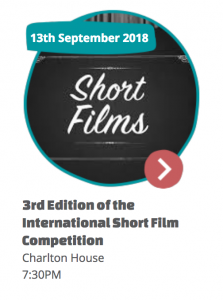 The year is 1980, and Jake (Will Brittain) seems to have his life going in all the right directions. He’s got a supportive mother and an adoring girlfriend. An aspiring photographer, he’s getting ready to go to college and begin his adult life.

But when his absentee father shows up and wants to come back home, Jake wants no part of it. Frank is a Vietnam vet whose alcoholism has caused him to be abusive in the past, and Jake decides it’s better to hit the road and hitchhike to California.

He is arrested in New Mexico, where the cops take his last fifty bucks. Broke and desperate, he bums a ride with Smitty (Glenn Morshower, Agent Aaron Pierce in 24), a fast-talking ex-con who is likewise on the ropes but more than happy to enlist Jake in his grifting schemes. Jake balks at first, then reluctantly begins to participate and eventually discovers that he’s good at the game, too… maybe even better than Smitty.

Rolling along easily like a car trip through tiny Texas towns, the film develops an irresistible rhythm of its own. Morshower’s Smitty can easily charm the birds from the trees, and Brittain does a credible job transforming Jake from an angry youth to a self-assured conman. Director Claude Green and co-writer Jack Ballo’s screenplay doesn’t pass judgment on either of them, and that’s what makes it work so well. Refreshingly lacking any Hollywood-style dramatic explosions, we’re given a character study reminiscent of the work of Horton Foote.

Claude Green will be attending to hold a Director’s Q&A after the film. Come and meet Claude and hear about the making of the film and his own journey from City of London executive to the world of American film!

Refreshments: American-style coffee, cookies and muffins are available to buy at the downstairs counter if wished, to get you into that US vibe…  Or enjoy a Frankie & Benny’s burger next door, before the show!

The film is being shown on the first floor of Starbucks and there is no lift so it won’t be suitable for anyone with mobility challenges.  It’s one flight of fairly easy stairs though.

The venue will be giving 10% off all non bottled beverages bought on the night. Just say  “The Doo Dah Man” when placing your order!

See Travel options to Starbucks below.

And the winner is…

The 3rd edition of the Charlton and Woolwich Short Film Competition will bring a selection of very exciting short films under the theme “Diversity and Future”.

The winner will receive a £500 prize towards the production of their next project. We will also be showing the winner from last year. Food and drink for all on sale on the night.

Other films showing at Charlton House

Nearest rail station is Charlton and plenty of buses drop off nearby on Woolwich Road (Victoria Way stop) on either side of the road: 161, 177, 180