It’s a feature film shot on an iPhone 5s. If that doesn’t intrigue you enough to want to join us at The Lido Café on 4th December at 19:30, Sean Baker’s Tangerine also explores a side of Los Angeles very rarely (if ever) seen on screen. It caused a stir at Sundance, it might trigger a hullaballoo in Herne Hill. 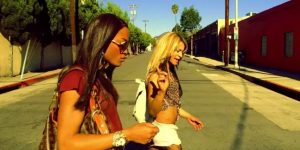 Sean Baker’s micro-budget film caused a major stir at Sundance in 2015, following his revelation that all the filming was done on an iPhone 5s (yes, like the one in your pocket!). The film’s official synopsis was that: “It’s Christmas Eve in Tinseltown and Sin-Dee is back on the block. Upon hearing that her pimp boyfriend hasn’t been faithful during the 28 days she was locked up, the working girl and her best friend, Alexandra, embark on a mission to get to the bottom of the scandalous rumor. Their rip-roaring odyssey leads them through various subcultures of Los Angeles, including an Armenian family dealing with their own repercussions of infidelity.” What this synopsis didn’t mention however was that Sin-Dee and Alexandra are trans individuals and that the main subculture the film explores is a trans street culture rarely seen on film.

The film’s Director took to the streets of Los Angeles’ unofficial red light district for 8 months to get to know the area and its people. This approach led him to the film’s two lead actors and the rest, as someone probably said once, was history.

This is a Christmas film from a less than traditional mould. While we might think it’s great, we know nothing. Join us on Sunday 4th December at 19:30 at the Lido Café to make up your mind for yourself.