And so the credits rise on our second Charlton and Woolwich Free Film Festival. The numbers never tell the whole tale, but our 8 days saw 18 events, 11 separate venues, 100s of viewers and only 1 fire alarm going off. From locally produced short films to huge mega-blockbusters, with kids films, documentaries, musicals, comedies and horrors in between, we had something for everyone. When we weren’t showing films, we were solar observing, guiding walks of wartime Woolwich and awarding a cool £1500 in prize money. It was a busy 8 days!

As in year 1, we relied very heavily on a hardcore of volunteers, with some welcome new additions. And we’re already on the lookout for more next year, so please get in touch if you would like to be involved.

But before we shuffle back into hibernation, what movie related speech would be complete without a few thank you’s. Am nervous to even attempt it given we’re bound to miss several important people out, but better to try and fail then not to try at all, probably. 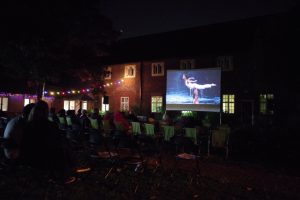 Thanks firstly to our excellent venues and the people within them who helped. In no particular order, thanks to the Greenwich Rugby Football Club on Plumstead Common, to George and Bryana at Artfix, to the guys and gals at The Woolwich Equitable and everyone at Garrison Church (especially Rita for going above and beyond the call of duty with the toilet plunger). Thanks to the team at Charlton House and next door at The Stables who between them screened 4 of our events. To Carly and the crew at The White Swan for allowing us to scrawl rude graffiti throughout their upstairs. To the teachers and staff at Thorntree Primary, the staff and children of Charlton Park Academy and Mimi and Michael at the Old Cottage Coffee Shop. And last but by no means least to Peggy and the staff at Building 10, Woolwich Riverside who provided us a glorious location for both our opener and closer.

We also had some new friends helping us along the way this year. We welcomed the Woolwich and Plumstead Roses WI who provided tea, cakes and decorations at SUFFRAGETTE. And the boys from Deserter came, drank us dry, laughed at WITHNAIL AND I and then left, leaving only memories and a suspicious waft of smoke in the beer garden. And the Charlton Athletic Museum crew put on HA’WAY THE LADS, and bought along James Dutton, grandson of Charlton legend Jimmy Seed, thanks to all of them. 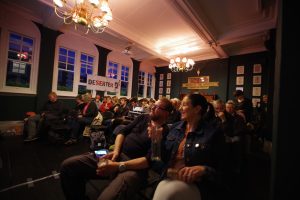 We had some lovely people come along and make our films extra special too. The Flamsteed Astronomy Society setup their solarscopes in the gardens of Charlton House, then showed us the wonders of SUNSHINE via the wonders of PowerPoint. The Creative Generation Dance crew worked our hips at both DIRTY DANCING and, less provocatively, RISING FROM ASHES. Also at RISING FROM ASHES, the team at Drum Africa showed us how to drum, and we had great fun with Colourshot and LUHOC Enterprise. And who can forget the 50s Hotrods that unexpectedly arrived at Building 10 just in time for GREASE SINGALONG? Not the local residents certainly. Thanks to the Detonators Club for driving up. And thanks to Ronnie Ripple and the Ripchords for cutting a rug and rockin and rollin to get us in the mood!

Food and drink came from many places, but special mentions to Kaleidoscope Kitchen, Neil from the London Beer Factory, the Taproom (still chuckling at their themed pizza offering, the Ham Solo) and Betsy’s Bar.

The SHORT FILM COMPETITION gets its own Thank You section! Thanks are due to Charlton House (again) for hosting the night, to Maria Korolkova from University of Greenwich for introducing, to April Kelly from Mini Productions, Adam Hassan, Dewyne Lyndsay and (prize winner) Kirk Miller Lewis for answering questions from the audience. And not least to Rockwell Property who provided sponsorship for the event.

So that’s that, I’ve reached the stage of the farewell speech where I’m sobbing uncontrollably and the producers are drastically trying to get me away from the mic.

But one last thank you, to all the people who came out – in often wet and cold conditions – to see the films we put on, to put money (occasionally Euros) in our buckets and most of all to enjoy the films that the crew already loved, and to help us see them afresh through their eyes.