Forget The Royal Wedding, forget The FA Cup Final and forget National Red Head Day (it’s really a thing).  There’s only one event to pop in your calendar on May 19th.  The outdoor screening of the Oscar winning ‘Get Out’ at Herne Hill’s iconic Brockwell Lido. 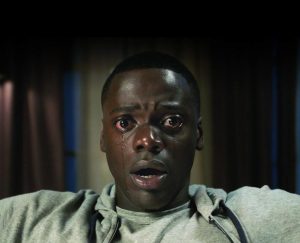 I remember the first time that I went to visit the in-laws.  They’re Hungarian (I’m not), they didn’t speak much English at the time and I spoke even less Hungarian.  Nervy times.  But we met and despite the language barrier, things were going swimmingly.  That was, until nature called.

“Honey!  What are you doing?  That toilet’s broken!”

Words that will haunt me forever, as shall the moments that shortly followed featuring my father-in-law and a toilet brush.  But anyway, what’s my point?  Well my point is that things could’ve been a helluva lot worse.
Take Chris (Daniel Kaluuya) for example.  A young African American fella who’s introduced to his girlfriend, Allison’s (Rose Armitage) white, middle-class liberal family in the film Get Out.  Things start off at level cringe, with phrases such as “Yo!  My Man!” and “I loved Obama!” ringing in our ears.  Then, gradually, things go from level-cringe to level-horror and we realise that we’re witnessing the stuff of nightmares.  Think ‘Meet the Parents’ meets The Stepford Wives with a dash of Deliverance and you won’t be a million miles off.

This screening will be subtitled!