We celebrate London History Day with a new film that explores the issues faced by a community in the 1970s. 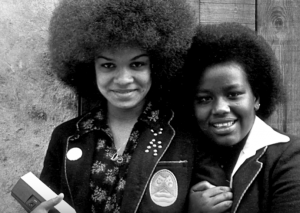 Directed by Cathy Hassan, Beyond the Photo (BTP) consists of individual stories recording the realities of Black British lives in the 1970s. Personal experiences are linked by themes of a discriminatory police culture, winter of discontent, poor inhumane housing, and rising voices of socially disgruntled young black men and women fuelled by radical sentiment to end the violence of systemic racism.

BTP explores the journey of one photo opening up to reveal social and historical narratives from times when “Sons of Empire” gave rise to fears of a black invasion, to a social, cultural and political awareness profoundly shaped by the US Civil rights movement and black activism. The documentary features interviews with family members of the Community leader Olive Morris, and the Civil rights activist Darcus Howe’s, one of his final interviews. Historian, Dr Robin Bunce, Homerton College, University of Cambridge, offers valuable insights into the turbulent 1970s.

Powerful images by Al Vandenberg, Charlie Phillips, Neil Kenlock, Homer Sykes, Nick Hedges along with many other engaging contributors explore themes of London’s 1970s ethnic and cultural landscape, civil unrest, areas of deprivation, Black Power as an ideology and a movement in Britain, the Afro as an expression of black pride and heritage, and photography as a powerful tool of representation in the construction of one own self-image and one’s own story.

Q & A after the film hosted by John Flannery with director Cathy Hassan.