LONDON PREMIERE: The River and the Wall 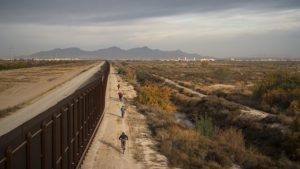 The opening event of 2019’s #PNFFF will be the LONDON PREMIERE of The River and the Wall at Peckhamplex, Thursday 5 September at 8.30pm.

The River and the Wall follows five friends as they venture into the unknown wilds of the Texas borderlands and travel 1200 miles along the Rio Grande.

On horses, mountain bikes and canoes, they set out to document the wildlife and landscape, and to explore the potential impact of a wall on the natural environment. However, as the wilderness gives way to the more populated and heavily trafficked Lower Rio Grande Valley, they come face-to-face with the human side of the immigration debate and enter uncharted emotional waters.