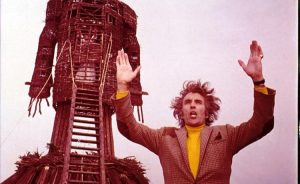 Although widely regarded as a horror film (The Guardian recently voted it the fourth best horror movie of all time), the 1973 British classic, The Wicker Man might better be considered as a tense drama, with folk-horror sensibilities.  Make up your own mind when the film is screened at the Ivy House, 40 Stuart Road, Nunhead SE15 3BE, on Tuesday 6th September at 8pm.

A righteous Christian police officer, investigating the disappearance of a young girl, comes into conflict with the residents of a secluded Scottish island in this unsettling, intelligent chiller. Invited to Summerisle by an anonymous letter, Edward Woodward’s constable is surprised to discover that the island’s population suspiciously denies the girl’s very existence. Even more shocking, at least to the traditionally pious officer, the island is ruled by a libertarian society, organized around pagan rituals. Repelled by the open acceptance of sexuality, nature worship, and even witchcraft, the officer adopts an antagonistic attitude towards the islanders, led by the eccentric but charming Lord Summerisle (Christopher Lee). The officer’s unease intensifies as he continues his investigation, slowly coming to fear that the girl’s disappearance may be linked in a particularly horrifying manner to an upcoming public festival. Anthony Shaffer’s meticulously-crafted screenplay creates a thoroughly convincing alternative society, building tension through slow discovery and indirect suggestion and making the terrifying climax all the more effective.

Performances are perfectly tuned, with Woodward suitably priggish as the investigator, and Lee delivering one of his most accomplished performances, as Lord Summerisle.