The story of New York street gangs and the music that gave birth to Hip-Hop culture. 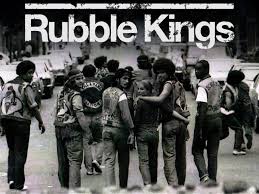 Rubble Kings, chronicles life during the era of gang rule in the late 60’s to mid 70’s. It tells the story of how a few extraordinary, forgotten people did the impossible, and how their actions impacted New York City and the world, giving birth to hip-hop culture.

Rubble Kings shows the rage erupting out of the assassination of Civil Rights leaders. The film uses footage from the time, mixed with interviews from surviving gang members who explain how peace came to the streets of the Bronx through the most unlikely and courageous of events that would change the world for generations to come by giving birth to hip-hop culture

The New Cross and Deptford Free Film Festival invites you to their closing party at Buster Mantis, the brand new Jamaican Themed bar in Deptford. Buster Mantis, complete with Jamaican food and a Rum Punch to die for (Grandmothers recipe) plus DJ sets from Keith Yearsley and Mi-Soul’s Ross Allen.