Rubble Kings is a documentary film that depicts gang violence in the Bronx during the 1970s. 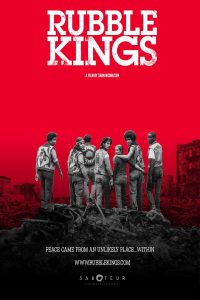 The film explores the similarities with todays gang culture and how it was the gang members themselves who came together and brought about peace and the birth of Hip Hop.

One of the film’s producers, actor Jim Carrey, stated the following during a Q&A session after the film’s premiere:

“The first time I saw the footage, I was completely blown away by this incredible thing that had happened, that no one knows about. A great movement towards peace, about really courageous people overcoming seemingly impossible odds and rising to love. Although I didn’t grow up in that situation, I can understand that idea, and I think it’s important that we all reach outside our own realms of experience and try to understand what people are going through and the things they have to overcome. It was really something I wanted to get involved with and support in any way I can.”