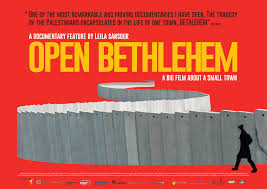 Palestine Night will be held on Friday 14 September at St James the Great Church in Peckham (45 Elm Grove, SE15 5DD) and will showcase the 2014 documentary Open Bethlehem.

Leila Sansour’s film is an account of her campaign to stop occupying Israeli forces from encircling her Palestinian hometown with a concrete wall.  Sansour’s film follows her attempts to unite Christians, Muslims and Jews in their desire for free access to the Holy City. The presenter Jon Snow called the film, “One of the most remarkable and moving documentaries I have seen, about this unreported story. The tragedy of the Palestinians encapsulated in the life of one family and one town – Bethlehem. See the film, then go to Bethlehem and see for yourself.”

OPEN BETHLEHEM is a story of a homecoming to the world’s most famous little town. The film spans seven momentous years in the life of Bethlehem, revealing a city of astonishing beauty and political strife under occupation. The film draws from 700 hours of original footage and some rare archive material.

While telling a personal story, the film charts the creation of a campaign to compel international action to bring peace to the Middle East.