In a strong year for animation in which Disney, Pixar, Illumination, Laika and Studio Ghibli all jostled for the Oscars’ crown Disney doubled down late in 2016 with Moana, the visually-stunning story of a Polynesian teenager’s quest to save her homeland. The Herne Hill Free Film Festival’s matinee film may well be aimed at children and those that appreciate a relaxed screening but don’t worry, we won’t be taking IDs at the door if anyone else wants to come along! Come down to effraspace at 2pm on 20 May to journey with us to the South Pacific in this animated fantasy. 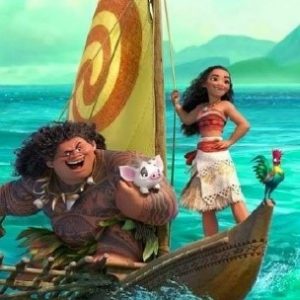 Moana (voiced by Hawaiian newcomer Auli’i Cravalho) is an explorer with fire in her soul and a love for the sea who, inspired by her grandmother, ventures into the wide blue yonder on a mission to restore the Heart of Te Fiti a mystical stone needed to help rescue her island home’s failing ecosystem. Ignoring her father’s advice to stay within the bounds of the reef surrounding their island home of Motunui, Moana locates Maui – the tattooed demigod played by Dwayne Johnson – who guides her in her quest to become a master wayfinder in a journey that brings close encounters with a swarm of pirates and a fiery lava monster.

Supported by the kind of score we’ve come to expect from Disney’s animation studios these days and with a script from Lin-Manuel Miranda, writer of the stage play Hamilton, Moana is a joyous animation and a film we’re really looking forward to having as our matinee screening in 2017. This event is targeted at the younger audience of Herne Hill, and those that appreciate a relaxed screening, but Maui won’t be on the door to bar anyone’s entry. So come down to effraspace at 2pm on 20 May for an afternoon of animated enjoyment for all the family!