When the lives of mother and daughter Santa sceptics intersect with that of Kris Kringle, one of the pair begins to suspect he may be the real deal. After being framed for assault and sent to a mental hospital Mr. Kringle’s only way out is to prove he is sane and convince people he is Santa! Join us at Holy Trinity Church on Saturday 17th December at 19:30 for this 1947 Christmas classic. 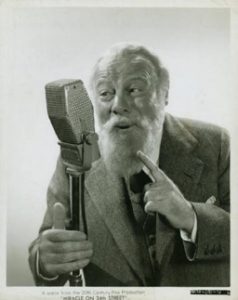 34th Street in New York isn’t just a connecting road between the Queens Midtown Tunnel and the Lincoln Tunnel or a place where Google tells me I can visit a shop called “Party City”. It’s where Macy’s is and where, in 1947, a Christmas miracle took place.

Susan, a precocious little girl, has been raised by her well-meaning mother not to believe in Santa Claus. When their lives intersect with that of Kris Kringle, a bearded old gent hired as a last-minute replacement for a drunken Santa who was meant to have lead Macy’s Thanksgiving Day parade, Susan begins to suspect he may be the real deal. After a jealous fellow employee frames him for an assault Kringle is placed in a mental hospital, and at the ensuing sanity hearing Kringle and his attorney attempt to prove that he is indeed Santa Claus.

We may not be able to offer you a Macy’s Thanksgiving Parade in Herne Hill (maybe next year!) but we can give you the next best thing. A screening of the original multi-Oscar winning Miracle on 34th Street at Holy Trinity Church on Saturday 17th December at 19:30. Bring yourself, bring the family, and bring a healthy dose of festive cheer.