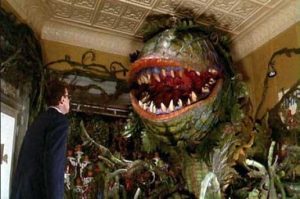 Starring Rick Moranis and Steve Martin, and featuring John Candy, Christopher Guest and Bill Murray, this adaptation of the off-Broadway success of the same name tells the story of Seymour, a colleague of his at Muchnik’s Flower Shop called Audrey and a plant procured from a Chinese flower shop. Left at that, we agree the film might not appeal, but if you make Seymour’s plant carnivorous, humongous and musical (and you factor in Steve Martin playing a sadistic dentist in one of the roles of his career) you can see why this has become a cult classic over its 30 year history.

Marking the pinnacle of Rick Moranis’s career (yes, even after taking into account Honey, I Shrunk the Kids and its wholly original sequel Honey, I Blew Up the Baby) we are excited to be showing this botanical blockbuster in Herne Hill in 2017. So come down to the South London Botanical Institute on 23 May at 8pm for a floral film in a vegetal venue. We promise there’ll be no more phytobiological puns (as you can tell, we’ve already run out).