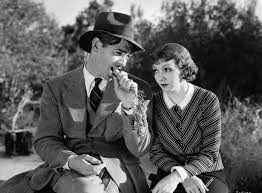 It Happened One Night is a 1934 pre-Code American romantic screwball comedy directed by Frank Capra in which a pampered socialite (Claudette Colbert) tries to get out from under her father’s thumb and falls in love with a roguish reporter (Clark Gable).

It has garnered critical acclaim and is widely hailed one of the greatest films ever made. It Happened One Night is the first of only three films (along with One Flew Over the Cuckoo’s Nest and The Silence of the Lambs) to win all five major Academy Awards: Best Picture, Best Director, Best Actor, Best Actress, and Best Adapted Screenplay

Refreshments available in the crypt cafe.