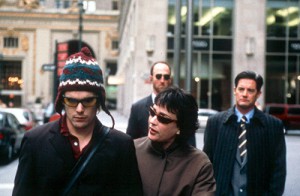 New York, 2000. A spectre in the guise of the newly-dead CEO of Denmark Corporation appears to Hamlet, tells of murder most foul, demands revenge, and identifies the killer as Claudius, the new head of Denmark, Hamlet’s uncle and now step-father. Hamlet must determine if the ghost is truly his father, and if Claudius did the deed.

The city’s contradictions of beauty and squalor give the movie a sense of place. New York becomes a complex character in this vital and sharply intelligent film.