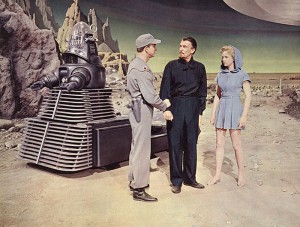 In this sci-fi classic, a spacecraft travels to the distant planet Altair IV to discover the fate of a group of scientists sent there decades earlier.

When Commander Adams and his crew arrive they discover only two people: Dr Morbius and his daughter Altaira. Soon, Adams begins to uncover the mystery of what happened, and why Morbius and Altaira are the sole survivors.

In this 1956 pop adaptation of Shakespeare’s The Tempest. Walter Pidgeon is the Prospero figure, presiding over a paradisiacal world with his lovely young daughter and their servile droid – a classic robot called Robbie