Do the Right Thing

A regular on lists of the best films of all time and the film that brought Spike Lee fame, fortune and a reputation as one of America’s most vital up-and-coming directors, Do the Right Thing follows life in Brooklyn one hot summer Sunday and in doing so delivers a film about race that, impossibly, empathises with all the participants. We’re excited to be bringing this modern classic – scandalously overlooked at the 1990 Academy Awards – to one of our new venues for 2017, 198 Contemporary Arts and Learning. So come along on 18 May at 8pm to see the film that made the career of one of the most influential directors of the last 30 years. You’ll regret it if you don’t! 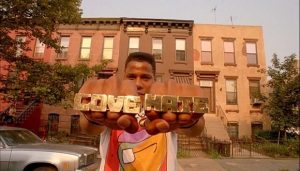 Everyday Sal Fragione opens the pizza parlour he’s owned for 25 years. The neighbourhood has changed considerably in the time he’s been there and is now composed primarily of African-Americans and Hispanics. His son Pino hates it and would like nothing better than to relocate to their own neighbourhood. For Sal however, the restaurant represents something that is part of his life and sees it as a part of the community. What begins as a simple complaint by one of his customers, who wonders why he has only pictures of famous Italian-Americans on the wall when most of his customers are black, eventually disintegrates into violence as frustration seemingly brings out the worst in everyone.

When Roger Ebert saw this one for the first time he had tears in his eyes, and its Oscar’s snub has gone down as one of the most glaring in the Academy Awards’ history. It is, quite simply, a great film that you need to see. And we’re giving you the chance. All you have to do is come to 198 Contemporary Arts and Learning at 8pm on 18 May. Easy. As. That.