In 2017 housing rose to the top of the British political agenda for the first time in a generation. But despite the media spotlight, few stories examined the catastrophic long-term failures that resulted in a chronic shortage of social housing in the United Kingdom. 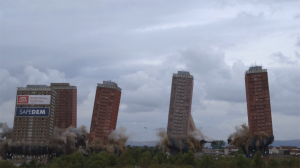 The residents of our local Cressingham Gardens Estate feature in the film. There will be readings by the residents from their book 306: Living under the shadow of Regeneration . There will also be a Q&A after the screening with Dispossession director Paul Sng, associate producer Liza McKenzie, Barrister Jamie Burton, and Anne E Cooper of Save Cressingham.

As part of this year’s Herne Hill Free Film Festival we are excited to be partnering with the Norwood and Brixton Food Bank, helping to raise awareness for this most worthy of local causes. We will be collecting food donations at this screening so, we encourage you to bring along any non perishable food items. We will be tweeting information about urgently needed items so stay tuned on Twitter to @HerneHillFilm.