If you thought German New Year celebrations were all about glühwein, strudel, hearty men playing brass instruments and lederhosen you would, apparently, be wrong. You’d also be stereotyping a whole nation and, we suspect, offending many of our German neighbours here in Herne Hill.

As we don’t want to offend our German neighbours any more than they have been already following this year’s referendum result, we are extending the hand of friendship by launching our Christmas free film festival at the bi-lingual Judith Kerr Primary School’s Christmas Fair on 3rd December. Over the course of the afternoon we will be doing repeat screenings of the short German New Year staple, Dinner for One – you may not have heard of it but we assure you our European neighbours have. Join us to find out what it’s all about (and have some glühwein and strudel)! 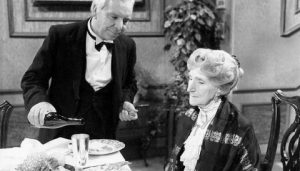 There are myriad New Year’s Eve customs worldwide. In Japan, toshikoshi soba noodles are eaten to bring in the coming year. In North America, finding someone to share a New Year’s Eve kiss with as the clock winds down has become a boon to the romantically-challenged. In Germany, however, a different tradition has taken form: every year on 31st December, TV networks broadcast a short black and white two-hander comedy skit called Dinner for One.

In 2016 Herne Hill Free Film Festival is doffing its proverbial cap to this most, erm, traditional of German customs, with a number of screenings of Dinner for One at the bi-lingual Judith Kerr Primary School Christmas Fair on 3rd December. In a year in which the British public voted to leave the European Union, join your Herne Hill neighbours between 12pm and 3pm to celebrate and embrace this mid-20th Century Anglo-German comedic collaboration* with what we hope will be a glug of glühwein and a cinnamon’y slice of strudel.

If you’ve not seen the film before, we don’t want to ruin the surprise. But as with all good Christmas comedies it involves a butler, a nonagenarian who goes by the name of Miss Sophie and, most importantly, a copious amount of booze.

*It was originally commissioned by a German TV network, and features a cast comprisinng two British comics.