Intimately depicting the deprivations of post-war Italy while simultaneously transcending them with a universal story of hope, despair and raw human emotion, Bicycle Thieves graces this year’s festival as a timeless classic. This is a film about a man who needs a job. 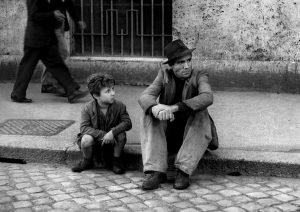 Unemployed, like many in the post-World War II Val Melaina neighbourhood of Rome, Antonio Ricci gets a lucky break and is offered a prized municipal job cycling around the city putting up advertising posters. Having already sold his bicycle to support his wife Maria and his young son, Bruno, they are forced to pawn the family’s bed linen so that he can take the job. For a brief moment the prospect of a stable and less impoverished future for their family glimmers, but then disaster strikes and Ricci’s bicycle is stolen, leaving him to comb desperately the dilapidated backstreets and darkened Roman piazzas with Bruno in search of justice.

A masterpiece of Italian neo-realist cinema, Bicycle Thieves is widely held up by critics as one of the greatest films of all time for its uncompromising portrayal of poverty and the way it strips people of their dignity. The film was praised for its exclusive use of non-professional actors, startling in comparison to the gloss of Hollywood, and for the window it provides into ordinary Italian life at the mid-point of the century. As a father/son tale, it has plenty to captivate younger viewers, but its emotional complexity and the underlying socio-economic commentary it provides will leave all with a new appreciation of the fragility of the human condition.