Free (No ticket required - First come first served)
8:30PM
OUTDOOR: Peckham Rye Common
Bring something to sit on and whatever you need to stay warm and dry

We regret that this event has been CANCELLED.

In consultation with our contributors and collaborators, out of respect for the sad passing of Her Majesty Queen Elizabeth II, we have decided to cancel tonight’s event.

Women’s football has come a long way in the last 20 years! Long before the Lionesses’ 2022 triumph director Gurinder Chadha was way ahead of the game with this enjoyable film with a great soundtrack about skilful footballer Jesminder who is determined to play despite opposition from her family.

This is a bike powered screening on Peckham Rye Common with Electric Pedals. Come and pedal to power the film!

Before the screening for under 18s from 6.30 to 8pm . Come and show off your skills as striker or goalkeeper! 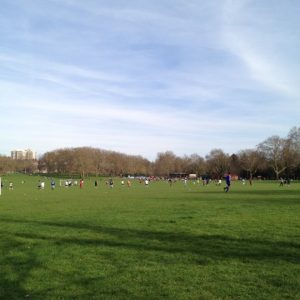