Billy Bob Thornton has a criminal record, a drinking problem, a red and white suit and a weakness for festive robberies. Join us at 8pm on 15th December for the profanity laden alternative Christmas classic Bad Santa, and realise that whatever you’ve done in 2016, compared to Billy Bob Thornton, you’ve been a very good boy or girl. 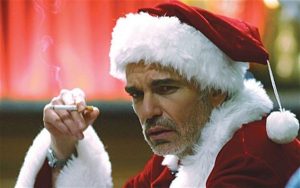 Since the early noughties Billy Bob Thornton has been recognised as one of cinemas great Santas. While he might not be a cuddly Mr. Claus or a silly St. Nicholas’s, he certainly is an ex-con with a drinking problem, a red and white suit, and a weakness for festive robberies. In 2003 his attention turns to the prospect of robbing a suburban Arizona department store, although his carnal desires, a bartender with an attraction to Santas, a child convinced that he’s real and a nosy security guard conspire to get in the way of a lucrative Christmas.

Roger Ebert said that “Bad Santa is a demented, twisted, unreasonably funny work of comic kamikaze style… I didn’t like this movie merely because it was weird and different; I liked it because it makes no compromises and takes no prisoners. And because it is funny…”. Join us on 15th December at 8pm at Canopy Brewery for this profanity laden alternative Christmas classic. We may not be making any compromises or taking any prisoners, but we certainly are going to laugh.

We respect the Czechs for being bold enough to title the film “Santa is a Pervert” but as we’re a little more modest here in SE24 so we’ll be sticking with the original title. Bad Santa.