A Sunday In Hell

Free (No ticket required - First come first served)
8:00PM
OUTDOOR: Canopy Beer
Bring something to sit on and whatever you need to stay warm and dry

Follow the rigours of the 1976 Paris–Roubaix bicycle race from the perspective of participants, organisers and spectators at this special screening at Canopy Beer Co. 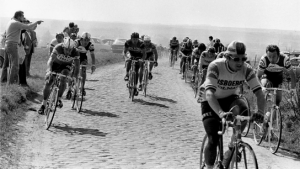 This documentary follows the Paris–Roubaix, the most famous and usually the most dramatic of the spring classics bike races. Much of the latter portion is over narrow, cobbled tracks that choke with dust on dry days and become slick and muddy in rain. For the riders it’s a challenge to keep going without puncturing or crashing.

The film captures not just the events of the 1976 edition but the atmosphere of a professional race. It begins by introducing the contenders: Eddy Merckx, Roger De Vlaeminck (the previous year’s winner), Freddy Maertens, and Francesco Moser, each with their supporting riders (the domestiques), who are charged with helping their team leader win. The film gives views of the team directors, protesters (the race is halted for a while), spectators, mechanics and riders. As the cobbled section is entered the selection begins. Riders puncture, crash, make the wrong move – the race plays out. By the finish in the velodrome in Roubaix only a few are in with a chance. The winner is a surprise (Marc Demeyer), but that is part of the appeal. Post-race the exhausted riders, mired in dirt, give interviews in the velodrome’s showers.

A Sunday In Hell will be screened in the garden at Canopy Beer Company, Herne Hill’s very own microbrewery and tap room. Canopy brew three times a week and have an ever-changing rosta of beers alongside its core stalwarts of Brockwell IPA, Milkwood Amber and Ruskin Wheat Beer. This is an outdoor screening so the film will start when it gets dark, please wear warm clothes.