A married couple who are preparing to celebrate their forty-fifth wedding anniversary receive shattering news that promises to change the course of their lives forever. 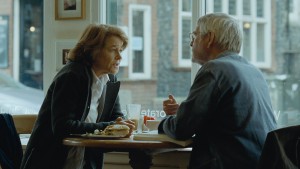 One of the best British film of recent times, by the director of Weekend, centres around a retired, childless couple, Kate (Charlotte Rampling) and Geoff (Tom Courtenay) who have been married for 45 years. One day Geoff receives a letter telling him that the body of his ex-lover before his marriage, Katya, has been found fully preserved in the Swiss glaciers. This event as well as the approaching arrival of their 45th anniversary coerces the couple into re-evaluating their relationship, the choices they have made in life, and their deepest desires.

Shot in the English countryside, the unreliable and unpredictable weather plays an integral role as the drama of untold memories and hidden emotions unfold. A moving film about time and the complex relations between the past and the present featuring stunning performances from the lead actors.