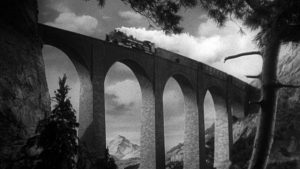 A young woman journeying across Europe realises that an elderly lady has disappeared from the train on which they were both travelling, but why will no-one believe her?

Now accessible on this rare occasion, the Old Waiting Room’s Victorian grandeur provides the perfect backdrop to celebrate Hitchcock’s much-cherished comedy thriller. Why not bring along an item that a 1930s traveler would take on a train journey – a woolen scarf; knitting; a magazine from the period; a flask of tea!

Access is directly from the street via a staircase only. Guests are advised to wear sensible footwear due to the uneven nature of the floor and to wrap-up warm as the space is not heated. Drinks will be available to purchase. Doors open at 7.30. Arrive early to secure a seat – this is a first come first served event.

Special THANKS to the Friends of the Old Waiting Room for allowing this event to happen!

A previously hidden architectural gem, the Old Waiting Room has been restored to its former Victorian splendor through community-initiated work and is now considered a local treasure. Originally one of London’s grandest waiting rooms, the beautiful 1860’s hall had been bricked up and abandoned for 50 years but is now grade 2 listed and accessible via the original iron staircase.