Films For Food: SOLIDARITY – a film by Lucy Parker 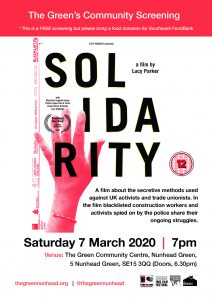 A film about the secretive methods used against UK activists and trade unionists. In the film, blacklisted construction workers and activists spied on by the police share their ongoing struggles.

Solidarity had its International Premiere at the International Documentary Festival Amsterdam in November 2019 and won the Competition for First Appearance for first time feature filmmakers.

This followed its World Premiere at Sheffield Docs Fest in June; London Premiere at Open City Docs Festival Solidarity (which both sold out!) and a continuing UK Cinema Tour.

This event is supported by Peckham and Nunhead Free Film Festival (#PNFFF), The Green Nunhead and Films for Food.