Come to Fison Fitness on Sunday 18th December to watch Buddy the elf travel to New York in search of his real father, and help him rediscover the true meaning of Christmas in the process. Featuring a PG-friendly fight with a fake Santa Claus, a Christmas spirit powered sleigh piloted by the real Santa Claus and a host of other adventures in between, bring the family for one of our favourite festive films from the naughties. 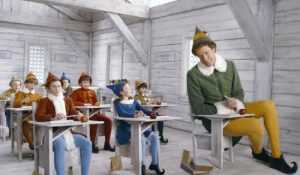 Since it was released in 2003, Elf has won a place in many people’s hearts. It’s also destroyed a few people’s minds as they can’t stand the sickly sentimental tale of Buddy, the Elf-imposter, as he travels to New York City in search of his real father and in the process helps him to rediscover the true meaning of Christmas. Here in Herne Hill though, we love it, so we hope you’ll join us for a family-friendly Sunday afternoon screening of this modern classic at Fison Fitness on 18th December.

As Santa Claus is making his rounds in the 1980s, a human orphan crawls into his sack and accidentally hitches a ride to the North Pole. Raised as an elf by Papa Elf, Buddy knows he’s at least four feet taller than most of the other elves but when he realises that he’s also a human, he decides to go to New York City and seek out his birth father. It may be silly, it might be riddled with more continuity errors than your standard Christmas film, and admittedly it also features a sleigh powered by Christmas spirit but it also comes from Jon Favreau, it stars Janes Caan and Bob Newhart, and it sees Will Ferrell fighting a fake Santa. It’s this combination that saw Roger Ebert describe it as “one of those rare Christmas comedies that has a heart, a brain and a wicked sense of humour, and it charms the socks right off the mantelpiece”. We’re inclined to agree, and we’ll certainly be at Fison Fitness on the 18th with enough Christmas spirit to power a Number 3 bus.