We’ve got four films at three venues on Tuesday 11 September 2018 at the Charlton and Woolwich Free Film Festival. 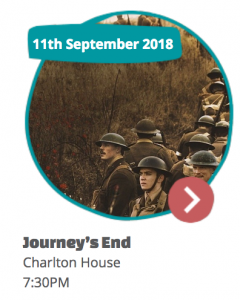 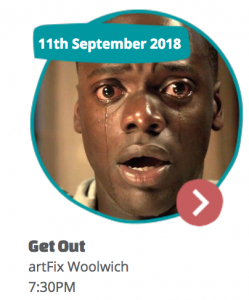 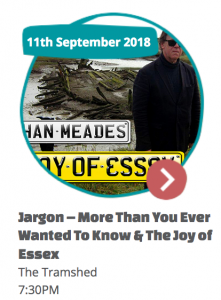 See Travel Options for each venue at the end, and a list of other films screening there.

Based on R.C. Sherriff’s 1928 play of the same name, this 2017 adaptation gives an insight into the experiences of a group of British officers who are ordered to carry out an impossible raid on the eve of Operation Michael, the final German Offensive of The Great War.

The play was heavily influenced by the author’s own experiences while serving with the 9th East Surrey Regiment during the same conflict. This adaptation was widely praised on release as a thoughtful, well-acted and meticulously researched piece of work.

At 7pm, before the film screening, we will have a talk from Clive Harris, a renowned military historian, author and battlefield guide, who will speak about the real-life events that inspired this film – Operation Michael, the last great German Offensive of The Great War and the allied efforts to stem the German advance. There will also be the opportunity for a Q&A session after the talk.

We also have a short filmed interview with Taff Gillingham, whose compnay, Khaki Devil, supplied costumes and equipment and acted as military advisors for the production.

We should also have on display, the original plans of Chalrton House when it was in use as a military hospital towards the end of The Great War and we should be able to identify the use of the Grand Salon and other parts of Charlton House.

Get Out at artFix

Now that Chris (Daniel Kaluuya) and his girlfriend, Rose (Allison Williams), have reached the meet-the-parents milestone of dating, she invites him for a weekend getaway upstate with Missy and Dean.

At first, Chris reads the family’s overly accommodating behavior as nervous attempts to deal with their daughter’s interracial relationship, but as the weekend progresses, a series of increasingly disturbing discoveries lead him to a truth that he never could have imagined.

There will be Café food and drinks, and good company!

Please note, this screening will have SUBTITLES.

Jonathan Meades turns his forensic gaze on that modern phenomenon that drives us all up the wall – jargon. In a wide-ranging programme he dissects politics, the law, football commentary, business, the arts, tabloid-speak and management consultancy to show how jargon is used to cover up, confuse and generally keep us in the dark.

Jonathan Meades: The Joy of Essex: Contrary to its caricature as a bling-filled land of breast-enhanced footballer’s wives and self-made millionaires, Meades argues that this is a county that defies definition – at once the home of picturesque villages, pre-war modernism and 19th-century social experiments.

The event will be attended by the director Francis Hanly, presenter Jonathan Meades and graphic designer Tony Bannister.

Other films showing at Charlton House

artFix on Powis Street is within walking distance of General Gordon Square and Woolwich Arsenal (rail and DLR, and pier) stations.

Other films showing at artFix

Travel options to The Tramshed

Thames Clipper ferries also stop at Woolwich Arsenal Pier. From Blackheath the 54 or 380 will take you to Woolwich and from Blackheath Standard (or Westcombe Park) also the 422.